If you would like to support this site, please consider Donating.
Useful Tropical Plants 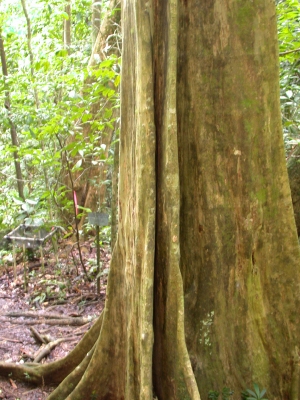 Line drawing of the leaves and flowers
Photograph by: Flora of Panama

Quararibea asterolepis is an evergreen tree with a moderately thick and narrow crown; it can grow 25 - 35 metres tall. The irregular bole can be 80cm in diameter, it is generally angular and bending as it rises up through the understorey, and it is creased by deep folds and ridges along much of its length. Projecting outward from the base are exceptionally thin, flat, and straight buttresses that meld with the trunk at a height of about one and a half metres[
510

].
The tree is harvested from the wild as a local source of materials.

]. Widely distributed in primary forests, particularly along creeksides or in depressions where the soil is poorly drained[
510

An ecologically important species, the tree produces copious quantities of fruits on a bi-annual basis - these fruits are highly sought-after by bats and many other creatures in the forest[
510

].
The blossoms smell strongly and sweetly of honeysuckle and, during intense flowering periods, they fill the forest air with their agreeable odour[
510

].
The leaves smell strongly and pleasantly of maple syrup after they are pressed and dried[
510

In very small saplings up to 3 metres tall, the branches leave the trunk at right angles and at regular, periodic intervals: with 5 or 6 of them appearing at discreet junctions spaced out along the bole. Cut correctly, the small stem of such a sapling can be spun between the hands, causing the spoke-like branches to whip or beat any liquid they are immersed in[
510

]. They are often used as whipping or beating devices in the preparation of liquid refreshments[
510

]. Many living individuals still bear the scars where such planks were cut from them[
510

If you have any useful information about this plant, please leave a comment. Comments have to be approved before they are shown here.